President of the National Civic Art Society, a non-profit organization headquartered in Washington, D.C. that promotes the classical and humanistic tradition in public art and architecture. Eleventh Chairman of the U.S. Commission of Fine Arts, an independent federal agency comprising seven presidential appointees who are the aesthetic guardians of Washington.

On October 19, 2020, I participated in a panel hosted by the American Enterprise Institute (AEI) regarding the draft Executive Order regarding federal architecture. To adapt AEI’s summary of the event:

Panelists also addressed the role of presidents in architectural decisions, improvements to the executive order, and historical analogies to a possible classical revival.

The Athenaeum Review recently published an hour-long podcast interview of me. Here is the description:

In this episode, we talk with Justin Shubow, President of the National Civic Art Society, about modernism and classicism, the profession of architecture and its role in civil society, public monuments in Washington, D.C., the philosopher Michael Oakeshott, and much more.

On the Eisenhower Memorial, and the role of the General Services Administration in Federal patronage of architecture, for example the Salt Lake City courthouse (2:00) — Is it affordable to build classically today? (8:00) — Can classicism be creative and innovative? (10:30) — Starchitects and expressionism (14:00) — Modernists against classicism: Harvard’s Joseph Hudnut critiques John Russell Pope’s Jefferson Memorial (17:00) — Philosophy, the Zeitgeist and architecture (19:30) — Roger Scruton, the vernacular and architecture (21:30) — Is there anything to learn from Las Vegas vernacular architecture? (25:00)

What are the institutional prospects for architectural classicism in America? (2:00) — Are modernism and classicism simply culturally relative phenomena, or can they somehow transcend their place and time? (7:30) — The virtues of the Chrysler Building and Art Deco, the last of the classical styles (13:00) — Classical architecture today: David M. Schwarz, Robert A. M. Stern, Allan Greenberg, Roman and Williams (15:00) — On Michael Oakeshott, rationalism and architecture (17:30) — Oakeshott’s political philosophy (23:00) — On philosophy and men’s clothing (26:30) — Joseph Shubow, and the beginnings of an interest in architecture and design (31:15)

In February, NPR and other news outlets reported on a leaked draft of an Executive Order titled “Making Federal Buildings Beautiful Again.” According to those reports, President Trump is considering signing the Order, which would re-orient federal architecture in a classical and traditional direction. At present, federal architecture is almost entirely Modernist and post-modernist in design. The draft order states:

On Monday, October 19 from 2:00 PM to 3:30 PM ET, the American Enterprise Institute (AEI) will be hosting a web event on “Making Federal Buildings Beautiful Again: The Debate Over the Future of Federal Architecture.”

The event, which includes audience Q&A, will stream live HERE. You can also RSVP.

I’m pleased to report that I’ve joined the Board of Advisors of the new Roger Scruton Legacy Foundation, which honors the work of the eponymous British philosopher, critic, and author who served on the National Civic Art Society’s Board of Advisors, and who passed away in 2020. In 2018, Scruton was appointed chairman of the UK government’s new Building Better, Building Beautiful Commission, which was established to promote better design of homes and living spaces. In a speech regarding his role on the commission, he said, “Aesthetic values are not arbitrary adjuncts to our intellectual equipment; they are our one sure defence against vandalism, and our way of resisting the forces that are destroying our city centres, and drowning us in junk.”

A brilliant, erudite defender of classical architecture and art, and an advocate for the preeminent role of beauty in human life, Scruton’s work on aesthetics and architecture is some of the very best of its kind. Indeed, he was the greatest philosopher of architecture of his time. A fierce opponent of Modernism, he also distinguished himself by his TV documentary essay “Why Beauty Matters.”

Scruton’s published works include The Classical Vernacular: Architectural Principles in an Age of Nihilism, The Aesthetics of Architecture, and Beauty: A Very Short Introduction.

Patrick Hagopian, Senior Lecturer in History and American Studies at Lancaster University, published a well-researched, peer-reviewed article, “From a ‘New Paradigm’ to ‘Memorial Sprawl’: The Dwight D. Eisenhower Presidential Memorial,” about the making of the National Eisenhower Memorial. (PDF here) It appears in the book Constructing Presidential Legacy: How We Remember the American President (Edinburgh University Press). Hagopian discussed my role in the controversy:

Congressional leaders, conservative journalists, and others picked up on the cues coming from Eisenhower family members [in opposition to Frank Gehry’s design] and from a damning report Shubow had issued. . . .

Members of Congress borrowed a line of attack first mounted by Shubow, citing the need for a verbal explanation of the symbolic meaning of the tapestries. How, he asked, was anyone supposed to know that the trees depicted in the mesh represented the landscape of the Midwest? It could be anywhere, Kansas or Kazakhstan. “Monuments,” Shubow said, “ought to be clear and unequivocal in their meaning . . . . They must be legible without a guide or key, and certainly without a visitor center or iPad. Monuments speak to us even without signage.” Legislators critical of the Gehry design extensively quoted Shubow’s words. They said the memorial “should be self-explanatory so that ordinary Americans will understand the ideas being conveyed without the need of a visitor center or guide.”

On October 10, 2019, I’ll be giving a public talk at the Dallas Museum of Art titled “Building Dystopia: What Went Wrong in Modern Architecture.” The free event, which starts at 4:00 pm, is sponsored by the Edith O’Donnell Institute of Art History at the University of Texas at Dallas. The talk will be followed by a reception. For more information, click here.

U.S. Modernist Radio interviewed me for its architecture podcast. I discussed my work at the National Civic Art Society and U.S. Commission of Fine Arts at length. You can listen here.

The National Civic Art Society, along with the Ethics and Public Policy Center and Encounter Books, co-sponsored a panel discussion in celebration of Bruce Cole and his posthumously published book Art from the Swamp: How Washington Bureaucrats Squander Millions on Awful Art. Cole was chairman of the National Endowment of the Humanities from 2001 to 2009, and he was a member of NCAS’s Board of Advisors.

In my talk, I discussed the disaster of the Eisenhower Memorial.

In partnership with Rebuild Penn Station: a project of the National Civic Art Society, Agora presented “The Future of Penn Station,” an evening addressing various proposals to fix the station. I moderated the event, which took place on October 24, 2018 at the W83 Ministry Center in New York City.

Kevin Baker, contributing editor to Harper’s magazine who is the author of numerous fiction and non-fiction books, including the City of Fire trilogy.

Richard Cameron, a principal designer at Atelier & Co. in Brooklyn.

Samuel Turvey, Chairman of the Rebuild Penn Station Steering Committee, and a Regulatory and Compliance attorney at TIAA. 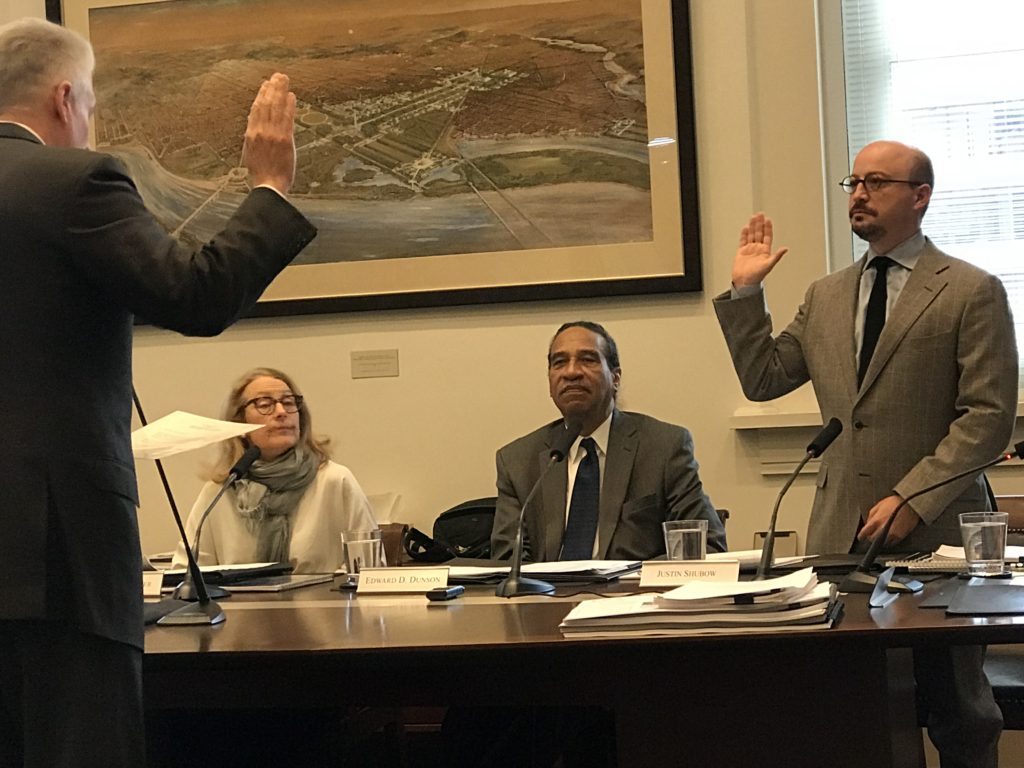